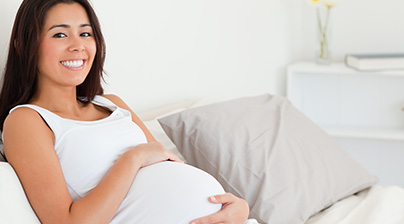 Women are at a higher risk of developing sensitive teeth during pregnancy because of their  hormonal changes. During pregnancy, their level of hormones (progesterone and oestrogen) increases 10 – 30 times, causing their gums to soften and bleed. This leaves them more susceptible to gum disease, sensitivity and other tooth problems. As a result, mothers-to-be may feel a sharp pain in their teeth.

What is Pregnancy Gingivitis?

Changes in hormones during pregnancy can cause gum tissues to respond to plaque bacterial toxins in an exaggerated manner. This leads to red, swollen and bleeding gums called Pregnancy Gingivitis.

What is Systema Sensitive 0.02mm: The ideal toothbrush for women during pregnancy

With Ultra Soft Convex Bristles, it massages the gums to help control the pressure and reduce brushing stress by 66%** for a smoothing and comfortable clean.

Systema 0.02mm bristles tip is 1/10 the size of an ordinary bristle tip, which is flexible enough to penetrate deeper along hard-to-reach areas such as gum lines and in between teeth to flick away plaque without hurting the gums.

Also, Systema 0.02mm super slim bristles is made from non-animal origin and is patented by Lion Corporation Japan – a leading oral care company in Japan with over 120 years of oral care experience.

Fun ways to connect with us