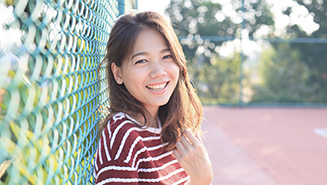 From puberty to adulthood, the risks of not only caries but periodontal disease (gingivitis, periodontitis) increases with changes in the living environment. It is recommended that the habit of checking gums be acquired at an earlier point, so as to maintain healthy teeth and gums.
POINTS TO NOTE
Dental and Oral Health and Care in Puberty
Puberty
Increase period for the Occurrence of Caries
Puberty is a stage where children not only experience physical changes including voice changes, but develop self-awareness and an increased interest in social life. As children grow, they snack more often between meals when they go out with their friends or stay up late, while it becomes difficult for their parents to keep an eye on them, and they tend to begin neglecting the habit of brushing that they acquired during school-age. It is good to take the time and consider the risks of caries with your children again at this stage. Help your children reacquire the habit of brushing and to practice self-care, so that they can maintain their oral health and prevent caries.
Increase period of Gingivitis
During puberty, children are prone to gingivitis due to hormonal imbalances or life changes. However, during the initial stage of gingivitis, there is no pain and is difficult to notice. It is important for them to perform self-checks of their gums by looking in the mirror before brushing their teeth, for the early detection and prevention of gingivitis. Let’s practice careful tooth brushing and to maintain healthy gums.
Adulthood
Onset period of Periodontitis
During the stage of adulthood, we become busy with work or family, and it is difficult to pay sufficient attention to our mouth and teeth unless there is pain or discomfort. While the risk of lifestyle-related diseases including diabetes increases due to irregular eating patterns, eating more meals outside of the home or smoking, we tend to neglect the management of our own health. Under these circumstances, adulthood is the most dangerous stage of life for our gums.
Fun ways to connect with us